The annual Poetry Africa Festival, hosted by the University of KwaZulu-Natal’s Centre for Creative Arts (CCA), takes place in Durban from 7 to 12 October 2019.

Celebrating its 23rd edition, the festival features a host of local and international poets, at various venues and schools around Durban, with Opening Night and evening sessions at the Elizabeth Sneddon Theatre.

The six-day programme will feature interactions and engagements with poets through performances, readings and book-launches with a number of poets featured each evening. Once again the festival includes the ever-popular Durban Slam Jam Competition and the festival finale, which showcases all the poets in the festival. The daytime programme includes a mashup of workshops, talks, discussions competitions, open mic opportunities, as well as visits to schools.

“Celebrating diversity, the festival includes local South African and international poets from Egypt, the USA, Spain, the Ukraine, and Nigeria,” says curator Siphindile Hlongwa of the CCA. ‘This year we continue to celebrate women poets and cast our focus towards fiery female poetic voices that use their art to mitigate the gender-based abuse and violence that continues to plague the country.’’

Sixteen poets are in the line-up for the festival. From Spain comes the prolific award-winning poet Guillem Gavalda whose poetry has been translated into Spanish, English, Turkish and Greek. Haitian-born Brooklyn-raised storyteller, Joel Francois who tell stories of love, family and race believes that the artist is the “architect of humanity”, features from the USA.

Nadra Mabrouk from Cairo, Egypt, is the recipient of the 2019 Brunel International African Poetry Prize and the 2019 Poets & Writers Amy Award.

Ukrainian Iryna Starovoyt is a poet, essayist, and Associate Professor of Cultural Studies at the Ukrainian Catholic University, she co-edits the website “Ukraina moderna” (uamoderna.com)

“The CCA and Poetry Africa have begun a long-term exchange programme with Nigeria that looks to further the literary and poetic connections between West and South Africa. At a time in South Arica’s shameful xenophobic history, this exchange programme is part of, not just a healing, but a celebration of our collective African identity. We celebrate the unifying power of the spoken and written word,” says Hlongwa.

This year the festival hosts five poets from Nigeria as part of an exchange programme with the Lagos Poetry Festival, which takes place in October. Efe Paul Azino who is one of Nigeria’s well-known performance artists and poets who co-founded West Africa’s first international poetry festival, the Lagos International Poetry Festival, which he currently directs. Titilope Sounga is an award-winning poet, writer and performer who calls both Canada and Nigeria home. Tobi Abiodun is a poet and spoken word artist who was born and raised in Benin City, who is a multiple Slam Champion, holding titles in major Nigerian cities, including Lagos, Abuja and Portharcourt.  Bash’ Amuneni is a poet and performer whose works explores humanity’s capacity for love. He is the author of the poetry collection There is a Lunatic in Every Town, a TEDx speaker and member of the Abuja Literary Society.

Once long-listed as one of MTV’s Brand New Artists, Writer and Poet, Yomi Sode has been performing for the past 10 years – balancing the fine line between both Nigerian and British cultures that can be, at times, humorous, loving, self-reflective and uncomfortable, her highlights include opening for Saul Williams and The Last Poets, appearances at Yahoo! Wireless Festival, Latitude, Lovebox, Olympic Village, Sadler’s Wells Theatre and working with Channel 4 and BBC Radio 1Xtra.

From South Africa comes Luleka Mhlanzi a performing poet, actress, creative writer and a youth activist who is currently based in Pietermaritzburg. Jolyn Phillips from the Western Cape, who published Tjieng Tjang Tjerries and Other Stories which was shortlisted for the University of Johannesburg’s (UJ) Debut Prize for South African Literature and won the National Institute for the Humanities and Social Sciences Prize for Best Fiction.

Busiswe Mahlangu is a writer, performer and TEDx Speaker from Mamelodi, Pretoria. Her work is hard-hitting and raw, holding space for conversations around poverty, mental health, education, violence, and healing. She is the founder of the Lwazilubanzi Project, a non-profit organisation that focuses on literature and creating learning spaces in townships and public schools.

Shashi Simelane (aka The Black Sash), is a well-known and popular performance poet, rapper, writer and student based in Verulam, KwaZulu-Natal.

Thembinkosi Blessing Qwabe is a teacher who holds BA, HDE, BA Hons, Masters and PhD qualifications and is a widely published author, who has written and published all genres in isiZulu. He has also published short stories and poems in English (The Perfect Choice and other stories, Scars of the Rainbow, Footprints of our Memory).

“Finally we are truly honoured to host legendary award-winning poet, South African poet, SA poet laureate and activist Mongane Wally Serote, whose work has blazed a trail for many generations of poets, demonstrating to the true power of the word to effect change,” says Hlongwa.

The full programme for Poetry Africa can be viewed on the website https://poetryafrica.ukzn.ac.za/. Tickets are R60 for adults and R40 for pensioners and students and can be purchased through Computicket. 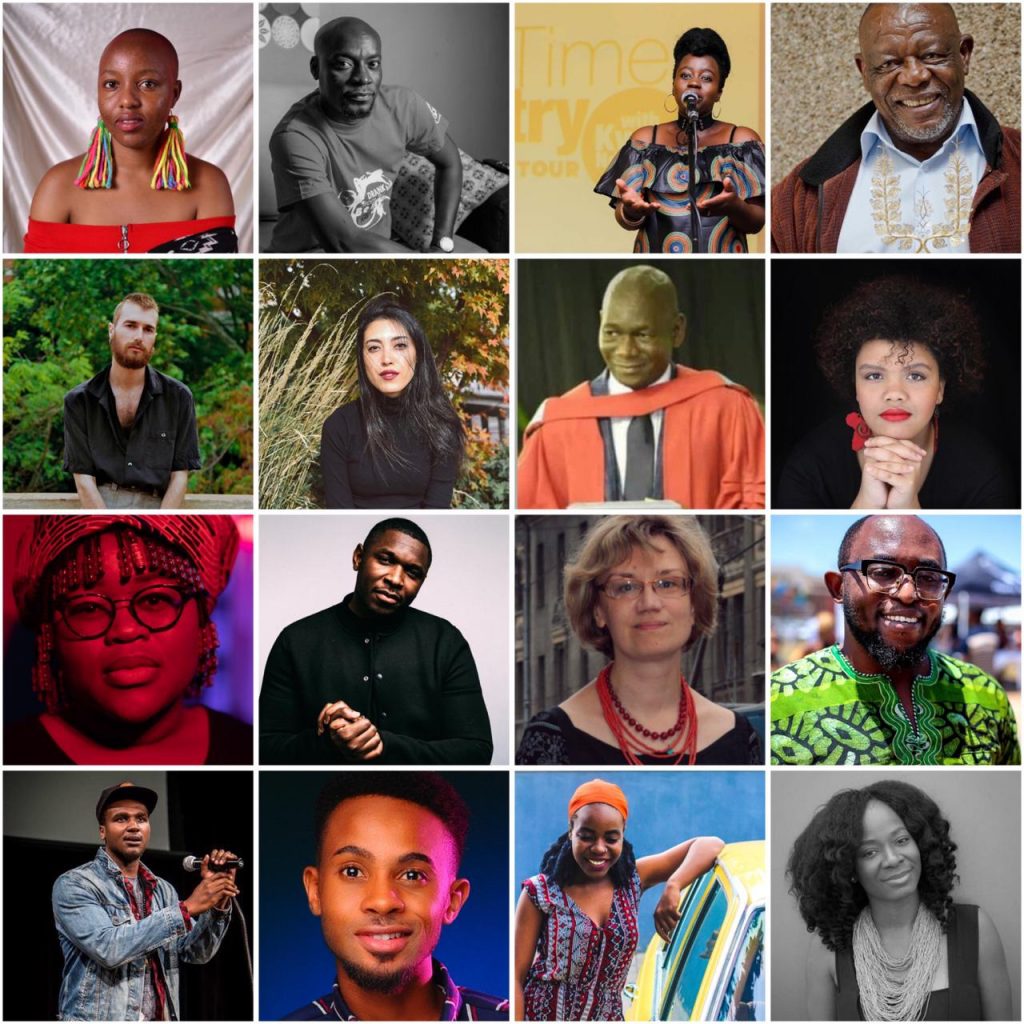 Poetry Africa calls for submissions of poems To commemorate the 45th anniversary of the Soweto Uprising on June 16, the
Read More

12 October | Saturday | 15:00 | Rivertown Beerhall My Tonuge is a Rainbow by MoAfrika ‘a Mokgathi My
Read More