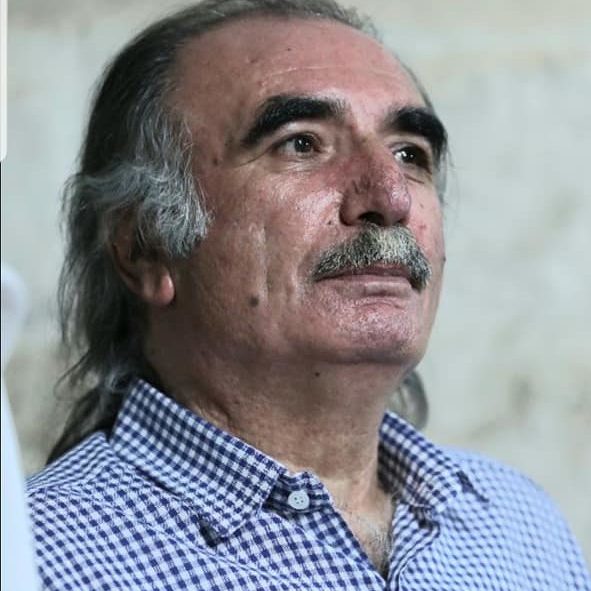 Musa Hawamdeh, a Palestinian poet and journalist, was born in Hebron, Palestine, in 1959.  He attended Secondary school in the city of Hebron and graduated from the Jordanian University with a Bachelor Degree in Arabic Literature, after being expelled from the University for a year for political reasons.  He was arrested several times as a student.

Musa works for Ad-Dustour – an Arabic daily newspaper, and has published several collections of poems.  “Vandalism”, his first collection of poems, was published in 1988 in Amman, and his second collection, “Love Poems”, appeared in 1998 with the support of the municipality of Greater Amman.

In 1999, he published “My Trees Are Higher” in Beirut which was banned in Jordan and many other Arab countries after being accused of violating The Koran and criticizing the religious establishment.

In February 2000, criticism of a poem entitled “Yousef” began to circulate in mosques in Amman. Radical Islamists escalated the criticism of the poem and the poet, calling for the poet to be killed.

In June 2000, Musa Hawamdeh was summoned to a Shari’a court to face allegations of apostasy; a charge that can lead to death penalty by the Islamic court. The Shari’a court referred the case to a civil court in 2003 and he was sentenced to three months in jail, although the poems that sparked the uproar were the poems that reject the story of the Zionist occupation in Palestine.

Much of his work has been translated into English, French, German, Kurdish, Persian, Turkish, Bosnian and Romanian. He also has many contributions in Arabic and international newspapers and magazines.

Musa Hawamdeh is a poet who is devoted to rewriting mythical and religious heritage through personal experience. His poetry starts with the poet’s own self and expands to include others and to reshape the past.