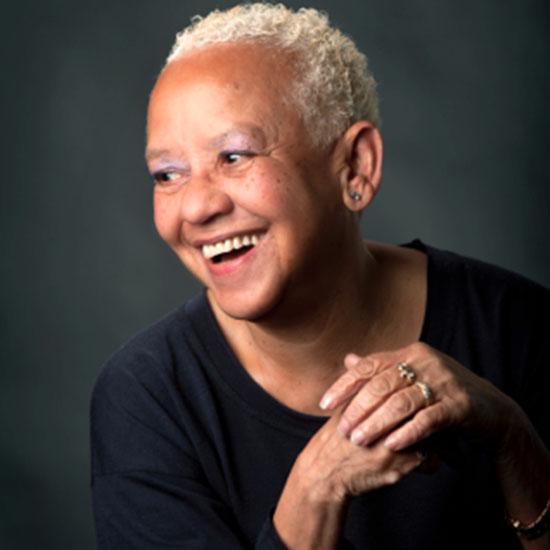 NIKKI GIOVANNI is one of America’s most widely read poets and one of the most renowned poets worldwide. Her poem, Knoxville, Tennessee, is arguably the single literary work most often associated with that city. She enrolled as an early entrant at Fisk University, where her grandfather had graduated but was “released” in February in 1961 because her attitudes were deemed inappropriate for a “Fisk woman.” She then returned home and took classes at the University of Cincinnati until she returned to Fisk in 1964. At Fisk, she reinstituted the school’s chapter of SNCC, edited the literary magazine, and graduated magna cum laude in history in 1967. Returning to Cincinnati, she directed the city’s first Black Arts Festival before enrolling briefly in the University of Pennsylvania’s School of Social Work. Recognising that she was not meant to be a social worker, she entered Columbia University’s MFA program. In 1968 she self-published her first poetry book, a nineteen-page staple-bound volume entitled, Black Feeling Black Talk, which sold some 2,000 copies in its first few months, which allowed Giovanni to self-publish her second book of poetry, Black Judgement. William Morrow Company approached her about publishing her first two volumes together in one book, and Black Feeling Black Talk/Black Judgement was published in 1970.

Her frequent appearances on the Black entertainment show SOUL!!, along with her extensive lecture tours, made her one of the most popular and recognisable poets of the Black Arts Movement. In 1971, Gemini: An Extended Autobiographical Statement on My First Twenty-Five Years of Being a Black Poet was a finalist for the National Book Award. In that same year she published her first children’s book, Spin a Soft Black Song, and released the album Truth Is On Its Way Is On Its Way, on which she read her poetry with and in juxtaposition to the New York Community Choir; although she made no money from it, Truth was an enormous success, selling some 100,000 copies in the first six months of its release. She did brief teaching stints at The Ohio State University and the College of Mount St. Joseph on the Ohio.

In 1987 Nikki Giovanni began teaching at Virginia Tech, where she was named, in 1999, a University Distinguished Professor. Since she has been at Virginia Tech, she has published two collections of essays, several illustrated children’s books (including the award-winning Rosa), and ten volumes of poetry for adults. Giovanni has received numerous awards in the course of her career, including seven Image Awards from the N.A.A.C.P., more than two-dozen honorary degrees, the first Rosa Parks Woman of Courage Award, the Langston Hughes Medal for Poetry, and the Carl Sandburg Literary Award; additionally, Oprah Winfrey recognised her in 2005 as one of twenty-five “Living Legends.” She continues to teach, write, and publish books, the most recent of which is A Good Cry. Her newest collection, Make Me Rain, will be released in Fall 2020.

My name is Melsie Sindile van Rooyen. 37 years of of age and coloured. I arise from the Mpumalanga province…
Read More